Europe’s capital city, the land of the saxophone, Flemish fries, but also of the beautiful Ardennes, the bustling beach resorts with wide beaches, city Bruges known as one of the world’s most romantic cities, city Antwerp as the city of fashion and the habitat of the Flemish primitives such as painter Rubens, the vibrant Europe’s capital city Brussels, the 2000 year old Roman city Tongeren known as the habitat of the Galliers and their King Ambiorix. Whether you're in Belgium to enjoy the beautiful nature or a delicious city trip; Belgium offers also delicacies: enjoy the tasty waffles, the world famous chocolate and pralines and most of all discover the special famous Belgian beers and fries. 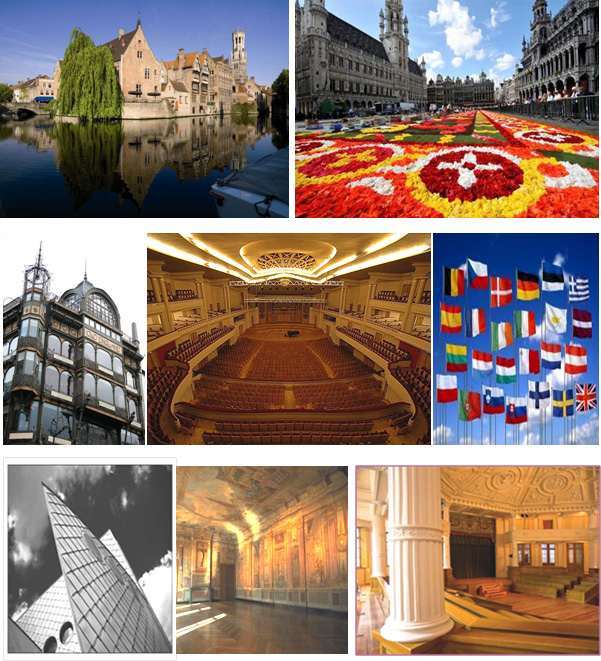 All concerts take place in the Cultural Center and historical medieval venues such as the beautiful wooden Academic Hall and the Emperor Hall, located at the site of the Benedictine Abbey in the center of the city Sint-Truiden. The academic hall is a beautiful historical wooden concert-hall offering the best acoustic quality and is hosting many important projects, recordings, concerts and events such as the prestigious Universal Marimba Competition. Sint-Truiden with its medieval history and surrounded by beautiful fruit orchards and cherry blossoms is surely a place to be for a wonderful holiday.

Is the principal city located in the Haspengouw region of Belgium, known locally as the Fruit Town of Flanders due to its extensive fruit-growing area, the famous cherry blossom fields, the Grote Markt (Belgium's second largest marketplace), the magnificent Baroque church and the Abbey of Sint-Truiden, founded in 657 A.D. and considered as one of the largest monastic complexes in the Netherlands region. Or, visit the gabled Town Hall, with its 17th century tower, classified as a UNESCO World Heritage Site, or spend the afternoon in the Flemish Minderbroeders Museum, a monastery and museum featuring works of religious art dating back to the 14th century. Nearby you will find the shopping streets and a central square with many restaurants presenting the best gastronomy of the Belgian kitchen.

Best known for its beers, waffles, chocolate, Brussels sprouts and mussels, Belgium definitely has a taste for extraordinary food and is considered being the World best kitchen. The Kingdom of Belgium certainly has style and taste when it comes to culinary art and haute cuisine. The most exquisite dishes are masterfully concocted by real wizards, who also happen to be world-famous chef artists. Good cooking and hundreds of fine beers are seen by many as part of Belgian culture. Belgian recipes were reputedly invented such as fried potatoes (despite the name of French fries), stewed beef with beer & mustard, speculoos (a sort of cinnamon and ginger-flavored cookie) and of the world known  Belgian chocolate and pralines, produced by the most renowned chocolate houses.

Some of the most impressive museums in Belgium are the Royal Museum for Fine Arts in Antwerp, which has an admirable collection of works by Peter Paul Rubens. A visit worth is surely the Rubens house in the old center of Antwerp. The Plantin Moretus Museum, a world heritage site, is the complete factory of the largest publishing house of the 17th century. The Groeninge museum in Bruges shows a collection of the Flemish Primitives. The Royal Museums of Fine Arts of Belgium in Brussels owns artworks of many periods, including a large René Magritte collection which is arguably the most internationally known Belgian artist. Located in the center of Brussels, steps away from the central train station, the Museum of Music Instruments is known for its collection and its architecture. The building itself is a remarkable Art Deco monument. Inside, they have a large collection of instruments from its birth to modern times, as well as exports from the four corners of the world.

The Romanesque Collégiale Saint-Gertrude de Nivelles (1046), the Cathedral Notre-Dame de Tournai, the Gothic 15th-century Cathedral of Our Lady in Antwerp, Worlds most beautiful Central Station in Antwerp, the Baroque Brussels Grand Place and the Brussels Royal Palace are examples of the Rich heritage over 1000 years. Representatives of the astonishing Art Nouveau style of the 20th century are the famous architects Victor Hoga and Henry van de Velde.

Aside the invention of the saxophone by the Belgian instrument maker Adolphe Sax in 1846, many important classical composers were born in Belgium. One of the most famous are Beethoven, César Franck, but Henri Vieustemps, Guillaume Lekeu and Wim Mertens are also noteworthy. Many great Medieval and Renaissance composers, such as Gilels Binchois, Orlande de Lassus, Guillaume Dufay, Heinrich Isaac and Jacob Obrecht  came from the rich aria and world center of music in those times (see the Franco-Flemish School).