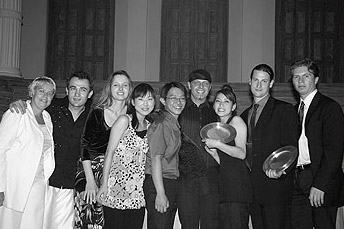 The second edition of the International marimbacompetition, Belgium 2004 was held August 20-27 in the beautiful sounding wooden ‘academiezaal’ in the town Sint-Truiden, near Brussels . (A festival was held in conjunction with the competition showcasing clinics and concerts by the jury members, finalists 2001 & extra guests). Eighty seven solo marimbists and twenty five marimba duos competed.

Congratulations and good luck for the finalists and all competing candidates!!!  Your performances were fascinating and inspiring to us all.  Many thanks to the organisations and all volunteers, to the P.A.S. and all appearing companies for their tremendous support, to the composers Eckhard Koptezki & Jan Van Landeghem, to the Mol Percussion Orchestra and their conductor Leo Ouderits for their superb accompaniment of the final round, to all appearing artists (H. Murase, K. Kotuko, M. Sekizawa, N. Takada, M. Orai, duo Xoc, I. Billic and trio Pulse( and finally to all jurors for their intensive work.  It was wonderful to share all together the joy of marimba music during one week.  Ludwig Albert - Artistic Director

From 4 nominated candidates the extra ‘Young Talent Prize’, was finally given to Min Jeong Song( Korea -17 years) and finalist  Chin-Cheng Lin (Taiwan-Belgium-19 years) for their exceptional talent and musicality.
The originality prize (publications of own composition or arrangement by Beurskens Music Edition) was given to  Taiko Saito (J-D) and Zhengdao Lu ( China ).

Concert platforms offered by Classic Concert (Au) were given to Peter Korosin.

Showcase concerts at the PASSIC 2004 and the Belgian marimba festival edition 2007 were given to the first prize laureates.

The award of honour 2004 was given to following artists for their tremendous contribution in the marimba & percussion field: Keiko Abe (J), Zefferino Nandayapa , Jan Pustjens & Mol Percussion Orchestra (B).